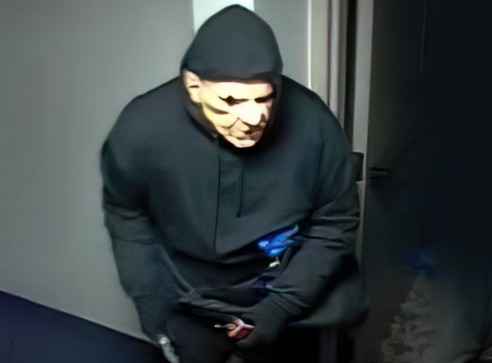 According to Massachusetts authorities, three suspects were involved in a bank robbery on Martha’s Vineyard on Thursday.

An image published by the Cape and Islands District Attorney’s Office shows a masked man wearing a black hoodie that may be one of three suspects involved in Thursday’s robbery at Rockland Trust in Vineyard Haven.

Bank spokesperson said that no one was injured in the robbery, which took place around 8:15 a.m. Three armed robbers entered the bank, tied up employees, and fled in a stolen vehicle.

The three suspects were gloved, masked, and armed with handguns.

Bank officials have not disclosed how much money was stolen, and no suspects have been arrested.

There is no additional information that should cause undue fear,” according to the press release, which stated residents should “remain vigilant.”

Anyone with information about the crime is asked to call Tisbury Police at 508-696-4240.